Trusting God to Kill the Giants in Your Life 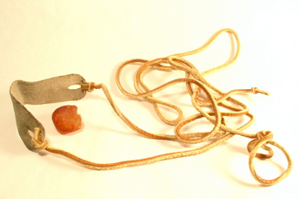 I recently read the story of David and Goliath and as I read I got caught up in the drama of the Bible story unfolding before me.  However, on this particular day the story took on a different twist. For the majority of my life, I remember the lesson being on David, how he battled the giant and how his faith in the Lord was enough to defeat Goliath with five little stones. It is no doubt that David had great faith because he knew the Lord and knew He would be faithful to His promises.

However this time as I reread the story, in stark contrast to David’s faith, I saw the lack of faith that the entire Israelite army had. This caused them to endure the endless ridicule from Goliath and the Philistines. The Israelites were under the same covenant as David, yet it did not have the same effect for them because they did not understand that God was on their side. The taunting of the Philistine army was an insult in the face of God. I was excited and indignant with the scene taking place. Day after day, the giant went out to the battle line and day after day he shouted insults at the Israelites.

What surprised me, was that this happened over and over for forty days. Each morning the Israelites dressed for battle as if they were preparing to fight. They took their place on the battle field, shouted war cries and got themselves mentally ready for the upcoming battle. They did this time and again until they saw Goliath step forward to challenge them. Then their hearts melted with fear and they lost all courage. Not a great representation of covenant people.

The Israelites arrived each day, ready for battle, with the best intentions until they saw the giant, then they figured he was too much for the entire army. The Bible gives a lot of description about Goliath, he over nine feet tall, he had a bronze helmet on his head and wore a coat of scale armor of bronze weighing five thousand shekels. On his legs he wore bronze greaves, a bronze javelin was slung on his back. His spear shaft was like a weaver’s rod and its iron point weighed six hundred shekels. He had a man just to bear his shield who went before him (I Samuel 17:4-7). While it is true that Goliath was intimidating, it was fear which defeated the Israelites not Goliath.

The Israelites continually went through the motions of believing that they would fight but when it came down to it, not one of them acted on their conviction. Their fear was the giant that immobilized and defeated them. However, when David showed up on scene this is what he said, “Who is this uncircumcised Philistine that he should defy the armies of the living God?” ( I Samuel 17:26 ). He looked at Goliath’s size in relation to God’s and Goliath was rather puny. Then he boldly told Saul, who up until this point had not found anyone to challenge the giant, “Let no one lose heart on account of this Philistine; your servant will go and fight him” ( I Samuel 17:32 ). And he did.

David showed remarkable faith, but his own words reveal that this faith was a lifestyle for him. He was used to trusting God to deliver him and he was used to God protecting him. This wasn’t David stepping out on a limb, this was David walking in the covenant he had with God who had always proved faithful. David knew what had been promised and took advantage of it. His own words to Saul reveal this, “But David said to Saul, “Your servant has been keeping his father’s sheep. When a lion or a bear came and carried off a sheep from the flock, I went after it, struck it and rescued the sheep from its mouth. When it turned on me, I seized it by its hair, struck it and killed it. Your servant has killed both the lion and the bear; this uncircumcised Philistine will be like one of them, because he has defied the armies of the living God. The LORD who delivered me from the paw of the lion and the paw of the bear will deliver me from the hand of this Philistine.” ( I Samuel 17:34-37 ).

What happened next is amazing, “David said to the Philistine, “You come against me with sword and spear and javelin, but I come against you in the name of the LORD Almighty, the God of the armies of Israel, whom you have defied. This day the LORD will hand you over to me, and I’ll strike you down and cut off your head. Today I will give the carcasses of the Philistine army to the birds of the air and the beasts of the earth, and the whole world will know that there is a God in Israel. All those gathered here will know that it is not by sword or spear that the LORD saves; for the battle is the LORD’s, and he will give all of you into our hands.” ( I Samuel 17:45-47 ). David killed the giant with his mouth long before he flung the stone at him. That shows boldness. He spoke what and how it would happen long before it did. That is the absolute definition of faith, believing what will come to pass long before it actually does ( Hebrews 11:1 ).

In life we have a choice. Will we be like the Israelites, letting fear rob us of sure victory or will we be like David, who rushed in with a godly perspective on the situation to claim victory? The difference is knowing God, His faithfulness and His desire for your success and putting that knowledge into action. He is faithful to His word and if He spoke it then we can rest assured that it is ours for the taking. God will kill the giants in our lives when we take the steps of faith toward victory.  “But the people who know their God will display strength and take action” (Daniel 11:32 NASB).