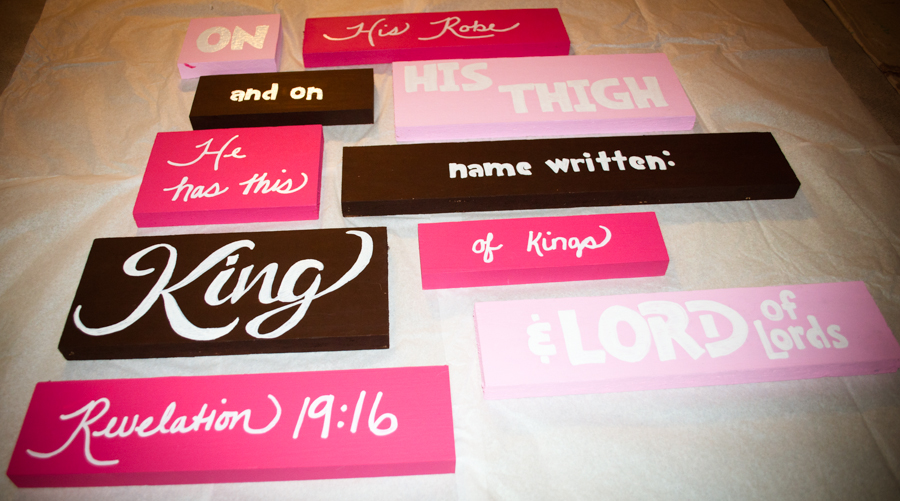 KING of Kings and LORD of Lords

I spent a weekend recently making a wall hanging for my office. I spent time thinking about the verse I would love to see each day while working. As I pondered and searched for the perfect one, this verse held it’s place at the top of my short list, “On his robe and on his thigh he has this name written: KING OF KINGS AND LORD OF LORDS” ( Revelation 19:16 ). I figured this embodies the perspective I need each and every day of my life, Jesus is King and Jesus is Lord, the rest is details!

As I worked to paint, stencil and freehand this design I found myself reflecting on Jesus. Being Christmas time I was thinking about His birth. Jesus was born to normal everyday people in humble circumstances. The world didn’t make room for Him were they dwelled so He was born among animals in a stable.

I’ve always looked at the Christmas story from the viewpoint of humanity, from the humble beginnings of our Savior. But Jesus' birth was anything but ordinary. In fact, it was so special it was a celebrated occasion in heaven. When Jesus entered into humanity to change history, God sent a host of angels to announce and celebrate!

"And there were shepherds living out in the fields nearby, keeping watch over their flocks at night. An angel of the Lord appeared to them, and the glory of the Lord shone around them, and they were terrified. But the angel said to them, "Do not be afraid. I bring you good news of great joy that will be for all the people. Today in the town of David a Savior has been born to you; he is Christ the Lord. This will be a sign to you: You will find a baby wrapped in cloths and lying in a manger." Suddenly a great company of the heavenly host appeared with the angel, praising God and saying, "Glory to God in the highest, and on earth peace to men on whom his favor rests" ( Luke 2:8-14 ).

As the shepherds were lying in the fields protecting their sheep, a host of angels appeared glorifying God for sending Jesus to mankind. The Amplified Bible describes this as the appearance of "an army of the troops of heaven (a heavenly knighthood)" ( Luke 2:13 AMP ). While we might see Jesus' birth as a humble beginning, the reality of it was that God pulled out all the stops to celebrate and glorify Jesus for entering into humanity as it’s Savior. The message was simple, because of Jesus' obedience; peace was extended toward mankind on behalf of God. God was in world reconciling it back unto Himself ( II Corinthians 5:18-19 ), which is why the angels jubilation broke out of heaven and into our world!

Jesus came to the earth as Lord ( Luke 2:11 ), and He ascended into heaven as ‘KING OF KINGS AND LORD OF LORDS’ ( Revelation 19:16 ). No wonder God announced Jesus' birth with a host of heavenly angels; it was one of the most significant events in the history of humanity. Heaven celebrated, while mankind slept through the night. But now we can look back from this viewpoint and join the celebration, praising God for Jesus. Knowing He is forever KING and LORD and this perspective changes everything!

JOY TO THE WORLD, the LORD has COME!