“I am the Lord’s Servant,” Mary Answered 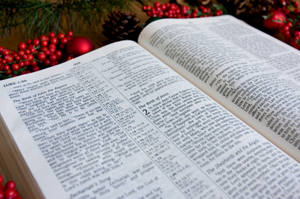 In the weeks leading up to Christmas I have found myself thinking about Mary. Perhaps it started after watching the Nativity Story. As the story unfolded I saw the steadfast faith of a teenage girl who faced condemnation from the world because she chose to accept the Word of God. Over two thousand years later we still marvel at her faith.

Her story can be found in Luke 1. The angel Gabriel appeared to her with some amazing news, “Do not be afraid, Mary, you have found favor with God. You will be with child and give birth to a son, and you are to give him the name Jesus. He will be great and will be called the Son of the Most High. The Lord God will give him the throne of his father David, and he will reign over the house of Jacob forever; his kingdom will never end” ( Luke 1:30-33 ).

Not only was this news incredible but it was also impossible because Mary was a virgin. The angel explained that the Holy Spirit would overshadow Mary and she would become pregnant with the Christ. Everything that was spoken and prophesied about the Messiah throughout the Law, the prophets and the entirety of the Scriptures would be gathered into the seed form and planted inside her womb ( John 1:1; 14, I Peter 1:23 ).

I love Mary’s response, “I am the Lord’s servant,” Mary answered. “May it be to me as you have said” ( Luke 1:38 ). This is great faith. She was a teenager, she was a virgin, she knew the penalty of being found pregnant outside of a marital relationship but she accepted the angel’s word without reservation. In other words, at that moment she received the Word of God that became flesh ( John 1:1; John 1:14 ).

After Mary went to visit Elizabeth, who was also pregnant with John the Baptist, she was greeted with these comforting words by her relative, “Blessed is she who has believed that what the Lord has said to her will be accomplished!” ( Luke 1:45 ). The Lord sent others to encourage her along the way as well as confirm the message spoken to her.

From Mary’s own lips came a wellspring of praise and adoration to the One who brought it all to pass. “From now on all generations will call me blessed, for the Mighty One has done great things for me— holy is his name” (Luke 1:48-49). As I read, I marvel at the faith she showed. From her own lips she spoke that future generations would call her blessed, all the time knowing that her generation would judge, condemn and consider killing her.

I think about Hebrews 11 (which is sometimes referred to as the “Faith Hall of Fame”). Although Mary is not listed here, the thread that ties these great men and women together is their faith in God. Mary certainly falls into this category and this is what the Lord recorded about them, “All these people were still living by faith when they died. They did not receive the things promised; they only saw them and welcomed them from a distance. And they admitted that they were aliens and strangers on earth. People who say such things show that they are looking for a country of their own. If they had been thinking of the country they had left, they would have had opportunity to return. Instead, they were longing for a better country—a heavenly one. Therefore God is not ashamed to be called their God, for he has prepared a city for them” ( Hebrews 11:13-16 ). He went on to say, “the world was not worthy of them...” ( Hebrews 11:38 ).

True to what Mary spoke, generations still call Mary blessed. Because of the great faith she had in God, she accepted the Word spoken to her. All generations have been blessed by God’s gift of Jesus. By answering that she was the Lord’s servant, ready in obedience to accept God’s plan for her life, she was an instrument mightily used by God. True to His word, He protected her, He provided for her and He brought about the Savior of the world through her obedience.

Taking a few moments to ponder Mary’s great faith is truly a reason to celebrate this Christmas day. I am blessed to think the of the mother of my Lord considered God faithful to do what he promised and that she willingly accepted the call on her life to bring it to pass. She was a woman of great faith. May God Bless you today as you celebrate the birth of His Son Jesus; our Savior, faithful Friend and Lord.